In this blog post, we are going to describe how flow logs may be analyzed using Dremio to look for signs of intrusion and possible signs of data exfiltration from an AWS RDS instance.

Flow logs capture essential information regarding network connections as traffic passes a network interface. Examples of the kind of data collected include the source and destination IP addresses, ports, number of packets / bytes, as well as start and end times of the packet transfers. Because of the structured nature of the logs, they may be imported for querying and analysis in modern data processing platforms such as Dremio, AWS Athena and Google BigQuery.

On AWS, flow logs can be enabled at the VPC level. The captured logs can be configured to be sent to an S3 bucket at regular intervals of up to 10 minutes each.

Flow logs data in the S3 bucket was organized into virtual datasets in Dremio as follows:

We started off by determining the number of unique IP addresses from where the connections originated.

The IP 201.48.16.81 turned out to be unknown. Geolocating the IP address told us it was from somewhere in Brazil. The specific location was unexpected given our developers didn’t own this IP address.

Next, we wanted to check how long the particular connection from the unknown IP address was alive in this particular interval since connections to the RDS instance are typically short lived.

Turned out the connection has been alive for the entire 10 minutes of the flow logs capture interval.

We then ran a modified version of the preceding query over several flow log intervals to determine when the connection from the IP address first originated, and when it finally got disconnected.

Connection from the IP address was alive for a total of 24 minutes.

Curious to examine the data transfer patterns, we drilled down into how many bytes of data were read by this connection from the RDS instance over the entire 24 minutes that it was alive.

For most of the 24 minutes, there wasn’t much transfer of data from the RDS instance. For 3 minutes, however, there’s a spike resulting in almost 1GB of data leaving the RDS instance. This likely means the initial time was spent doing reconnaissance – attempting to log in to the database, poking around the various schemas and tables looking for where the PII is. Once it was found, data in the relevant tables was exfiltrated all at once. The responses from the database were mostly ranging from 1200 to 5700 bytes, with most traffic transferring around 2100 bytes. However, we see at the end the usual traffic leading to transfers up to 73 MB, each.

As a final step, to ensure that the observed spike is in fact an outlier, we computed the mean and standard deviation for the bytes transferred attribute over the 7 day period.

And we used the distance of 3 sigma from the mean to filter the average of bytes sent to the unknown IP, showing that the spike, in fact, corresponded to an outlier.

Using a versatile data processing platform such as Dremio, we were able to analyze AWS VPC flow logs to identify and trace malicious data exfiltration activity. It’s important to note here that while useful for a preliminary security analysis of data transfer patterns, flow logs should not be the only source to rely on, and doing so will result in false positives. This is due to the absence of any database-specific semantic context at the level of network bytes. For example, it may not be clear whether the data being transferred is sensitive PII or just innocuous not warranting an alert. Flow logs also do not reveal the identity of an attacker besides their IP address. For these reasons, flow logs analysis should be used with caution for any serious forensics activity. In a subsequent blog post, we will describe how data exfiltration attempts could be identified and traced with certainty along with enriched information such as the identity of the attacker and the specific PII that was exfiltrated. 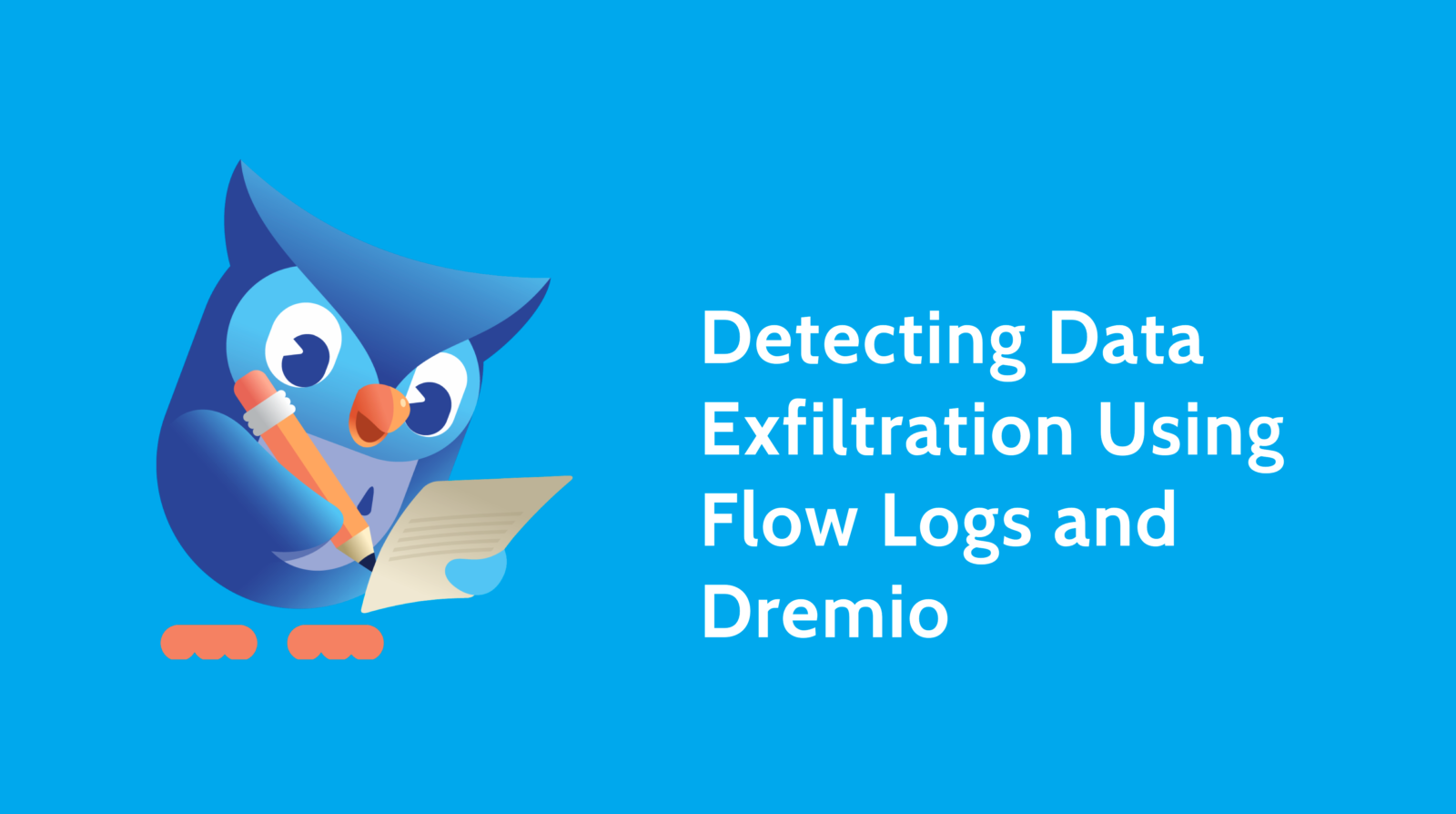